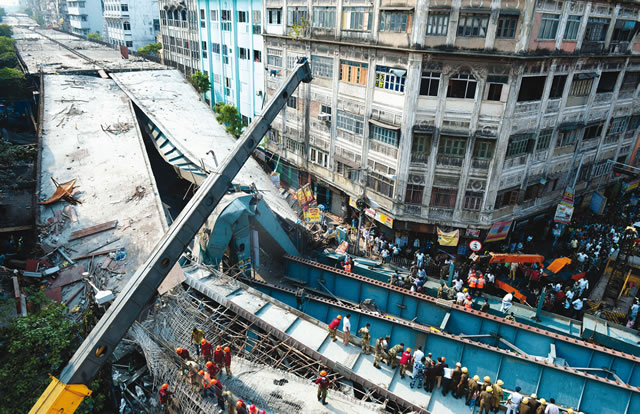 At least 22 persons were killed and 70 others were also reportedly injured on Thursday after a flyover under construction in Kolkata, India, collapsed.

The injured were admitted to two hospitals in Kolkata, the capital of West Bengal state while several others were still trapped in the rubble.

An official of India’s National Disaster Management Authority, Maj. Gen. Anurag Gupta, told CNN on Thursday evening that authorities had yet to know how many people were driving across the bridge when it fell.

“We cannot predict how many people are still under wreckage,” Gupta said. “We can’t tell, since it’s a bridge and not a building,” he said.

Gupta said in addition to those killed, at least 75 others suffered injuries in the midday collapse in a busy commercial area north of Kolkata’s centre.

A police traffic camera caught the moment the flyover collapsed while under construction in the Indian city of Kolkata on Thursday.

Up to 100 people were feared to be trapped under the debris and cars, trucks and rickshaws could be seen under the rubble, the Times of India reported. A rescue operation was underway.

“We heard a noise and got scared. Yesterday (the bridge) was welded. The bridge collapsed. I think at least 150 people are under the debris,” a witness, Ramesh Kejriwal, told the Asian News International news agency.

Yogesh Sharma was sitting at a small roadside tea stand with friends when the overpass, which spanned nearly the width of the city street and was designed to ease traffic through the densely crowded neighbourhood, “came down with a huge crashing sound.”

“I left my cup of tea and ran,” said Sharma, a 23-year-old resident of the Bara Bazaar neighbourhood, theAssociated Press reported. “I was crying at the spot.”

It was reported that the flyover ought to have been completed three years ago, but construction was delayed six times. Building collapses are common in India, where regulations can be poorly enforced and some builders use substandard materials.