Major attractions are closed and thousands of soldiers are on the country’s streets.

Public museums and other cultural venues in the Paris area will reopen, three days after the terror attacks in the French capital.

The culture ministry said in a statement on Sunday museums will reopen on Monday afternoon. 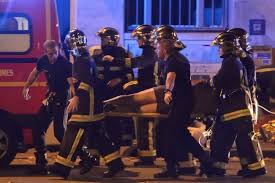 It comes as the toll from the attacks rises to 132, with three of the dozens injured dying in hospital.

City prosecutors say it is now known that at least three French suicide bombers were involved in the deadly attacks, with two of them living in the Belgian capital Brussels.

Police had on Saturday identified the first of the attackers, naming him as 29-year-old Paris native Omar Ismail Mostefai and saying he was involved in the attack on the Bataclan music venue where 89 people were killed.

Mostefai, whose identity was confirmed using a severed fingertip, was known to the intelligence services as someone close to radical Islam, but he had never been linked to terrorism.

It came as Greece’s migration minister said on Sunday a Syrian passport found by police at the scene of one of the attacks was issued to Ahmad alMohammad, an asylum seeker who had taken the migrants’ route through the Balkans.

Yiannis Mouzalas, junior interior minister for migration, said the 25-year-old was registered on the island of Leros on October 3, left the country on an unknown date and was last recorded in Croatia later that month.

French judicial sources said the name was not known to French anti-terror services.

The Serbian daily Blic had earlier published a photograph which it said showed a “Syrian passport issued in the name of Ahmad alMohammad … (who) travelled the entire Balkans migrant route”.

In an official statement the Serbian interior ministry said the Syrian passport was recently registered at the Presevo border crossing (between Macedonia and Serbia), where alMohammad formally sought asylum.

“It has been established that his data matches the data of a person who on October 3 was identified in Greece. There was no Interpol arrest warrant issued for this person,” the ministry said.

French police said the passport was found “near the body of one of the attackers” during the investigation into Friday’s deadly assault on Paris.

A French source confirmed to AFP that the passport found near the Stade de France bore the name Ahmad alMohammad, born on September 10, 1990.

However the same source urged for caution before any conclusion was drawn, saying it had not been established that the person identified in the passport was one of three suicide bombers who blew themselves up near the Stade de France.

The discovery of a Syrian passport near the body of one of the suicide bombers has raised fears that some of the assailants might have entered Europe as part of the huge influx of people fleeing Syria’s civil war.

French President Francois Hollande said Sunday he wanted the state of emergency declared after the Paris attacks to last three months, a move that would cover the upcoming UN climate conference.

The 12-day UN conference, which will be attended by dozens of heads of state, begins on November 30.