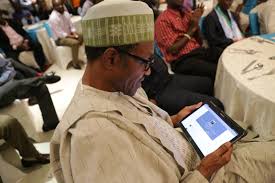 Resulting from the letter written to President Muhammadu Buhari yesterday by some people under the group name, ‘A Group of concerned Nigerians’, agitated Nigerians have taken to the social media to bewail what they described as the inability of the Buhari-led Federal government to deliver the ‘Change’ promised during campaigns. They called on the president to commence work of salvaging the worsening state of the country’s economy, thereby bringing the needed development.

Here is the full letter:

A desperate SOS to Mr. President

We are using this medium to pass this message across to you because all other options of getting our message across have been exhausted. As you are aware, Nigeria is facing a big fiscal crisis due to falling oil and gas revenues and it is important now more than ever before to expand other sources of government revenue to make up the shortfall between revenues and government budgets.

It is against this backdrop that a ruthless group of greedy and unscrupulous elements are attempting to drive the country over the financial precipice, with the unwitting or deliberate support of the Central Bank of Nigeria whose Governor, Mr. Godwin Emefiele has promulgated a number of policies that are destructive to Nigeria’s economic interest and financially ruinous to an already impoverished populace.

Right now as you are reading this, there are several vessels at the Lagos port loaded with rice awaiting the CBN FORM M which is mandatory for large-scale forex transactions. These vessels will generate Customs revenues in excess of N6b, but the Emefiele-led CBN has refused to approve the FORM M Non-Valid For Forex.

The automatic result of this is that these vessels will proceed to Cotonou in the neighboring Republic of Benin and discharge their consignments. These consignments will then find their way back into Nigeria because Nigeria is the only country in West Africa with a high demand for parboiled rice.

A lot of commodities that are supposed to be imported legitimately into Nigeria via the ports are being diverted to ports in Benin Republic and then brought into Nigeria through land borders such as Seme and Idiroko where Customs are conniving with agents to under-declare goods. For example, a truck loaded with 45tons of rice is to pay N 2.1m as Duty, but it will be rotated 4 times with just one Duty receipt.

If the CBN will not allow Nigerian businessmen to conduct legitimate trade through our own ports which create jobs for millions in Nigeria, why are these commodities being allowed to find their way to Nigeria’s corrupt and porous land borders via Cotonou?

Our investigations show that Stallion Group which owes Nigeria over N20b in unpaid rice Duties currently has four vessels discharging rice in Cotonou. This rice will eventually find its way into Nigeria after being massively under-declared at the borders, swindling our country of billions of Naira in revenues at a time when Nigeria is facing harsh financial austerity due to weakened government revenues.  We strongly suggest that all businesses owned by Stallion / Popular Foods /Mascot Agro should be immediately shut down and investigated for corrupt and treasonous dealings.

By A Group of Concerned Nigerians #OpenLetterToMrPresident