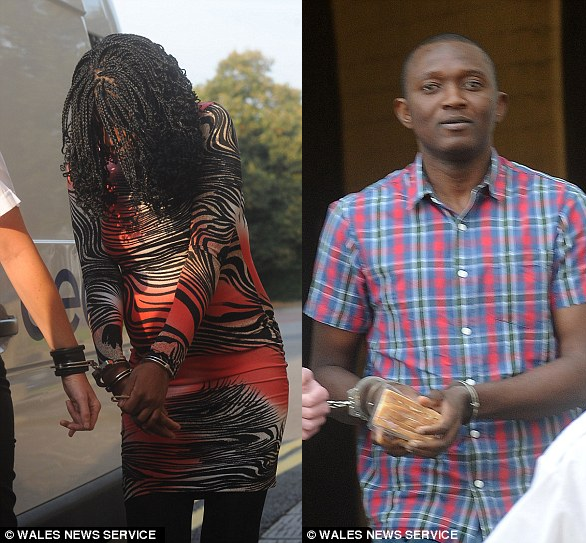 A brothel madam who used voodoo curses to force young girls to become sex slaves and made them eat live snakes has been ordered to pay back more than £20,000 out of her profits.

Lizzy Idahosa, 26, made more than £186,000 out of the Nigerian women, who were terrified with black magic and made to see a witch doctor for a sinister ‘juju’ ceremony, a court heard.

The two victims, aged 23 and 29, had their pubic hair shaved and were forced to eat live snakes and snails as part of the ritual before being flown to Britain where they slept with men across the country.

Idahosa was found guilty of trafficking the women at Cardiff Crown Court and was jailed for eight years in November 2014 – while her husband Jackson Omoruyi, 41, was sentenced to two years.

But prosecutor Eugene Egan told Cardiff Crown Court that investigators could find only £21,900 in Idahosa’s bank accounts.
Judge Tom Crowther ordered Idahosa to pay the cash traced to her accounts – or face a further nine months in prison.

Speaking about her horrific ordeal, one 29-year-old victim said: ‘It was not a big snake, but it was alive. I just closed my eyes and put it in my mouth. ’They told me if I messed it up, I would get sent back to Nigeria and Lizzy would kill me. I wanted to stop. I was ashamed of myself and I had no life.’

When the women arrived in the UK they were put to work as prostitutes, working in brothels at massage parlours across England and Wales.

They were told they had to give all the money they earned to Idahosa, and believed the black magic curses would make them go insane or die if they refused.

Idahosa and Omoruyi, who were arrested at their home in London, denied any wrong doing.
But police checked their bank accounts and found a series of transfers with Omoruyi acting as a ‘financial middle man’.

Idahosa had denied forcing the women to take part in a black magic ceremony, but claimed that she herself had been trafficked into the UK and forced to work as a prostitute. She told the jury she did not know the two women had been trafficked.

Idahosa, who is heavily pregnant, said she made an oath with her trafficker before leaving Nigeria and was forced to eat the roast heart of a cockerel.