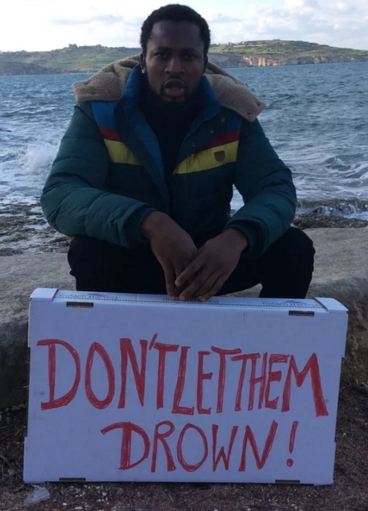 A brave Nigerian national who tries to rescue his younger brother has reportedly drowned in the Mediterranean sea en route to Italy.

The two brothers from Edo State – Monday and Osas Amanmien – had embarked on the deadly voyage across the angry Mediterranean Sea, intent on hitting Italy where they hoped to make a better living. But the trip turned sour midway, leaving Monday dead. He drowned in the sea following a boat wreck.

Although Osas miraculously survived the disaster, he had to endure one hellish hour, hopelessly floating on an empty keg and being brutally buffeted by the bullish, restless waves. And now, he lives with the eternal trauma of the last words of his brother. Monday had said, in a desperate tone: “My keg dey leak ooo,” – he meant that water was coming into the keg – before he finally went down.

Osas says his brother drowned so that he might live. He recalled that when it became obvious that the boat was destined to go down, Monday summoned courage and seized two empty water kegs beside him. One was good, the other was bad. He gave his younger one the better keg so that he would be afloat and live while he struggled with the bad keg. He eventually drowned, Osas said. Not even his dead body was retrieved.

It was learnt that before the brothers launched out on the sea journey, they were for weeks holed up in a Libyan ghetto, a camp for travellers. They could not set sail for Italy be­cause they were told that the sea was rough, a development that could make their boat to capsize.

All the same, all the travellers in the camp, including Osas and Monday, were excited. They were further delighted when they were told by their agents that they could embark on the journey and that the sea was no longer furious.

On the said day, Monday and Osas were to be ferried by agents who operated the ‘Gha­na Poli Two.’ The migrants paid their agents several thousands of Libyan Dinars, which, when converted, was about N170, 000 as their transport fare to Italy. As usual, hundreds of migrants fleeing Africa were in the number. They boarded the large boat and said fervent prayers for safety at sea.
Everything was calm as they set sail. With Europe on their minds, everyone was confi­dent of the good life that lay ahead.

Everyone began growing in confidence. Then midway into the journey, every prediction crumbled like a pack of cards. Soon, the unthinkable happened just as they were about to celebrate their successful entry into Italian waters.

The boat developed a fault. Then a big crack ma­terialised right at a very important part of the boat. It began to let in water, first in small quantities and then in very massive propor­tions. Before the jubilant migrants could re­alise what was amiss, sea water had penetrated and overpowered the hapless craft. Then it began to sink. Fear gripped everyone. Danger and death stared everyone in the face as the end drew near.

At that point, everyone burst out into prayers. Everyone began to pray in various tongues. But that seemed useless. With the waves lashing unrelentingly at the sinking boat, death and disaster appeared a touching distance away. Confusion and uncertainty set in. In no time, the water overshadowed the boat, leaving the migrants at the mercy of the deep, blue sea.
There was no rescue team in sight. To make matter worse, Osas and Monday could not swim. Those that could swim were able to sus­pend and sustain themselves on the water for close to an hour before help finally came.