Welcome to the Gambia, home to one of the most vicious and bizarre dictatorships in the world. Since taking power as a young army officer in 1994 military coup, President Yahya Jammeh has ruled Africa’s smallest mainland country through fear, force and what we can best describe as creepiness.
Born May 25, 1965: He was elected as President in 1996; he was re-elected in 2001, 2006, and 2011
He prefers that subjects address him by his full name — His Excellency Sheikh Professor Alhaji Dr. Yahya Abdul-Azziz Jemus Junkung Jammeh — and says he can cure AIDS.
The 49-year-old also imprisons people for alleged witchcraft and has threatened to decapitate all homosexuals, because they are “anti-God and anti-human.” Oh, and there’s his penchant for firing live rounds into crowds of peaceful demonstrators. Anyone who speaks up against his cruel, outlandish ways risks kidnapping, torture or murder, like Imam Leigh.

In all this, Jammeh has made his country the neighborhood freak. The rest of West Africa has taken big strides toward democracy over the past decade, with the election of the first female African president in Liberia and Ghana’s status as rule-of-law beacon. Yet the Gambia, 50 years independent, is where human rights go to die.

In 2013, it up and left the Commonwealth, a 54-nation grouping of former British colonies, suggesting to diplomats that Jammeh refused to tolerate any international criticism (he’d gotten a spate of it the previous year for resurrecting the firing squad).

Perhaps inevitably, attempts to topple Jammeh’s regime also take on a certain degree of bizarreness. The latest, in December 2014, was led by two Gambian-Americans with some military training, according to an FBI affidavit.

In August, the men bought weapons (including eight semi-automatic rifles) in the U.S., disassembled them, swaddled them in used clothing and stuffed the whole thing into 50-gallon barrels that were shipped via container to the Gambia.

In early December, the men arrived in the country, rented cars and drove them into the front and back of Jammeh’s palace. They figured Jammeh’s guards would flee — being unwilling to die for the dictator — but, oh, they were wrong. (The U.S. has charged the men under the Neutrality Act, which bars Americans from taking part in private military actions against “friendly nations.”)

Absent a coup or burst of energy from the global community, 2016 will likely see Jammeh re-elected with a fraudulent majority.

Indeed, though Jammeh is feared, he appears to have the genuine admiration of many of his citizens and some of the oblivious tourists who visit the beautiful country dubbed the “Smiling Coast of Africa.” For some 50,000 Britons each year, the Gambia remains a holiday destination — Jammeh keeps it safe, plus it’s a six-hour flight from Heathrow and a hell of a lot cheaper than Marbella. Tourism and peanut exports are helping the tiny state’s economy grow at a rate of 6.3 percent. 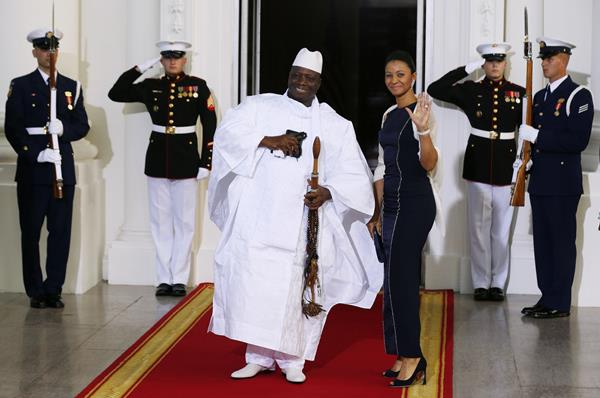 The Gambia’s President Yahya Jammeh and his wife, Zineb Jammeh, at the White House in 2014. Source: Larry Downing/Corbis

And even as most residents are poor, Jammeh scores well in the health department. Unlike itsWest African neighbors, the Gambia has avoided the Ebola epidemic, and its child mortality and maternal death rates are lower than the regional average.

The country also has achieved one of Africa’s highest vaccination rates, “which should certainly be applauded,” says Jeffrey Smith, advocacy officer at the Robert F. Kennedy Center for Justice and Human Rights.

To be sure, validating these claims is hard without a free press. In 2004, reporter Deyda Hydara was mysteriously gunned down after criticizing Jammeh’s regime. The president’s tight grip on the media also allows him to indulge his penchant for self-promotion. The newspapers report various honors: Jammeh being named the Pride and Champion of African Democracy, for instance, or his winning from President Barack Obama a “Platinum Award.” Neither exists outside Jammeh’s nightmare-scape. 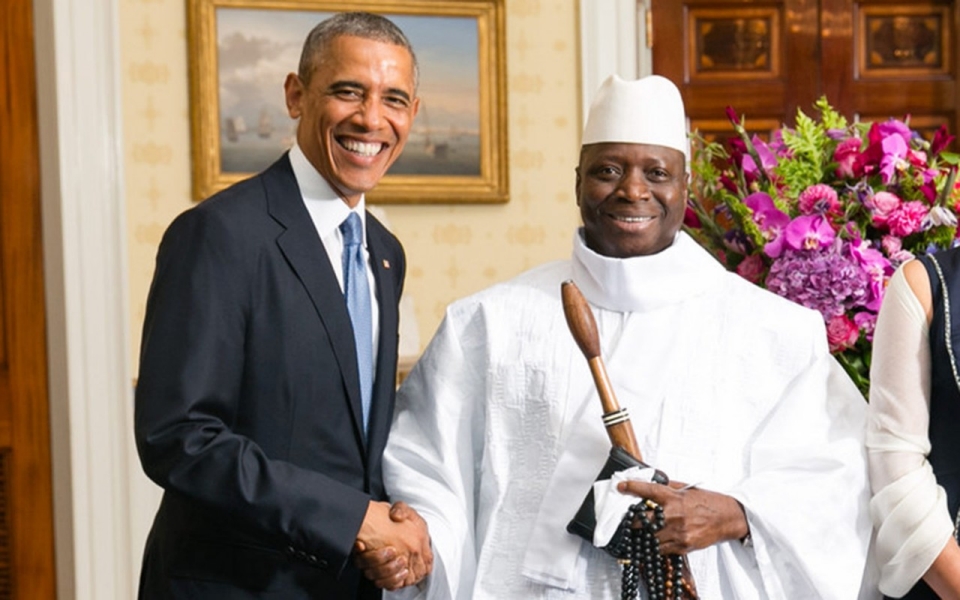 Obama did shake hands with him once — which Jammeh likes to use as evidence of the leaders’ closeness. And the U.S. hasn’t much pressured the regime: It has charged those coup perpetrators, after all, under the auspices of the Gambia being a “friendly nation,” and has stomached the alleged kidnapping of two American citizens, in 2013, by Gambia’s National Intelligence Agency. (Their whereabouts remain unknown.) Sometimes the U.S. issues outraged statements. But “if we can’t do anything about this isolated country with no economic ties to us, where will we? He’s the lowest hanging fruit,” says Smith.

In the meantime, human rights advocates say that Jammeh’s grip has tightened since December’s foiled coup. Some 30 family members and acquaintances of the coup leaders have been detained without charges, some of them as young as 14, and François Patuel, a campaigner at Amnesty International, says the organization worries that “repression will intensify.”

Last year in the Gambia, a bit of hope appeared when members of the U.N.’s Human Rights Council were allowed into the country to investigate. Alas, they were forbidden to enter its detention centers. As Patuel puts it, “With Jammeh, it’s always one step forward, three steps back.”