The body of the late Mr Chukwudumebi Okonta, a National Youth Service Corps (NYSC) member killed during the recent re-run elections in Rivers, was laid to rest on Friday.

Okonta was buried in his father’s compound at Ogbe-Orji Quarters in Illah, Oshimili North Local Government Area of Delta amidst tears by family members, friends and other mourners.

Fondly called “Pastor”, he was honoured with a novelty football match by the Illah Footballers Association (IFA), which he, as a member, played very active role and won Best Player Award twice.

Rev. Fr. Henry Ogonwa, who delivered the homily during the funeral service at Holy Family Catholic Church, Ajaji, Illah, described Okonta as a dedicated Christian who lived a good life and strived to build a future for himself.

Ogonwa said Okonta was a victim of the “vicious political leaders who do not have respect for life”.

“We need to immortalise this young man to give encouragement to the youths because the future belongs to them.

“We need to give the guidance; we need to respect human life and freedom for all.

“Politicians must not become desperate and no political position is worth the blood of anyone; we elected them to serve us and if they are not ready, they should leave the stage,” the priest said.

On his part, the NYSC Director-General, Brig.-Gen. Johnson Oluwumi, represented by Mrs Rhoda Kwaki, Director, Corps Welfare and Inspectorate, said that Okonta obeyed the clarion call to serve his fatherland.

“We are indeed grieved over his death; but Dumebi believed in Nigeria, served and died for Nigeria.

“And for the Okonta family, we pray that God will strengthen you and strengthen all us in NYSC and the entire Nigerians for the loss,” Olawumi said.

Also speaking, Mr Nelson Okonma, Chairman, Illah Footballers Association, described the deceased as a talented footballer, adding that 20 minutes novelty match in his honour was in recognition of his commitment, reports the News Agency of Nigeria (NAN).

“We will miss him greatly, but our consolation is in the Lord and we pray for his soul to rest in peace,” he said.

Mr Ifeachukwude Okonta, deceased’s elder brother, who said the death as a big blow to the family, added that his brother was a rear gem whose position could not be replaced.

“But all this is over now, as it is said, in everything, we give thanks to God.

“We want to thank the Federal Government, Delta and Rivers Governments, the NYSC, INEC, and all those who stood by us through this painful time,” he said. 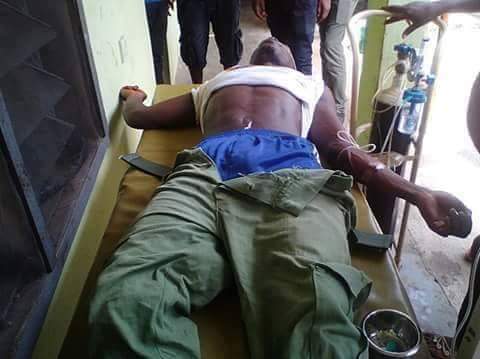