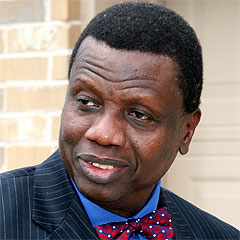 The General Overseer of the Redeemed Christian Church of God (RCCG), Pastor Enoch Adejare Adeboye, turned 74 last Wednesday. The RCCG Triumphant Elders Forum held a public lecture to appreciate the wonders of God in the life of the clergyman.

A good number of saints comprising of clerics,disciples and elders from different parishes and provinces of the Redeemed Christian Church of God gathered at the Haven Events Centre, Ikeja to honour the General Overseer who turned 74 on March 2.

A group of elders, mostly septuagenarians and octogenarians, put a public lecture together to mark Adeboye’s 74th anniversary under the aegis of the RCCG Triumphant Elders Consultative Forum. It was not really a traditional public lecture, but purely an extension of Christ’s Gospel. A blend of praise and worship songs were inspiringly rendered. A short, though heart-searing exhortation was also presented before the lecture.

Pastor Adeboye delivered a cogent and succinct message, all the audience irrespective of  their age left the venue blessed. His message was directed to people’s heart. He conveyed the message in a simple language, depicting his life and ministry as products of God’s favour and mercy and not of his making. And everywhere was quiet as though his clerics had never heard him.

He gave God the glory for having being with him through out his life, he never made mention of the odd times and not too pleasing moment he had in his life as a man of God.The guests were surprised, but not disappointed at the content of his message. And the message mapped out a kind of life God wants all pilgrims on the earth to live if they must gain eternal joy He had promised all without exception.

He gave a very simple recipe to game fame and affluence, he said “My advice to anyone that might be here who wants to become an influence in the society is give your life to Jesus Christ. That is the only secret.” Giving one’s life to Christ is a common message on the streets. But Adeboye testified to the fact that he became “highly influential, home and abroad, because he surrendered all to Him.”

And the outcome of his decision was amazing and awesome as well. As a result, Adeboye recounted that Christ had actually proved “to be the way out of problems. He is the way into joy and victory. He is the way forward. He is the way upward. If you lift up Jesus Christ, He will promote you, and when Jesus is the one promoting you He promotes you everlastingly.”

But the 2016 Pastor Enoch Adeboye Public Lecture Series provided much insight into Adeboye’s life and RCCG’s history apparently beyond what the guests had desired to know. The lecture was delivered by Prof. Oyawale Tomori, the pioneer Vice Chancellor of Redeemer’s University, Nigeria (RUN) and President of the prestigious Nigerian Academy of Science (NAS).

The lecturer said for Adeboye “is not only a man of vision, but also an energetic, consummate, relentless, tireless, persistent and inexorable vision carrier. We fondly call him Daddy, not because he is older than all of us, nor because he has more gray hairs than we can show. But we call him Daddy because he is a true representative of our heavenly Father, because his life shows the human attributes of God in whose image we are made.”