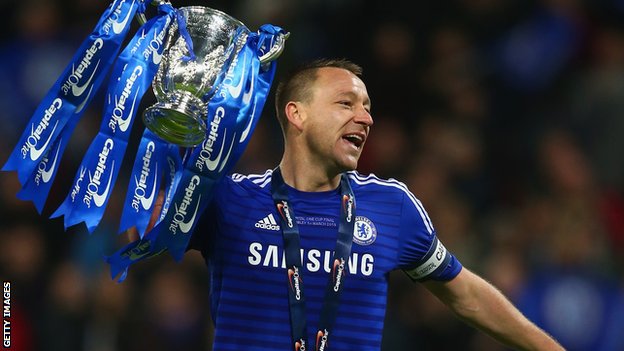 An English professional footballer who plays for and captains Chelsea, John Terry will leave Chelsea at the end of the season.

Terry who commonly plays as a centre back said the club would not be renewing his con­tract, bringing to an end his 18-year spell in west Lon­don.

Terry also revealed he will not join another Pre­mier League club but will continue his career else­where.

The popular Blues cap­tain said after his side’s 5-1 FA Cup fourth-round vic­tory over MK Dons on Sun­day: ‘To be honest, I was in last week before the Arsenal game and it’s not going to be extended. It’s my last run in the FA Cup so I want to make it a good one.

‘It’s a big season for me and I want to push on – not just in this competition but in the Premier League as well. I knew before the Ar­senal game so mentally I’ve kind of accepted it. We just have to move on.’

Terry went on to explain: ‘They said that when the new manager comes in, things might change. It’s a no at the minute. I needed to know now like I have done every January and some­times it takes a couple of months to get done.

‘Unfortunately it was a no. It’s not going to be a fai­rytale ending, I’m not going to retire at Chelsea. It’s go­ing to be elsewhere which it took me a couple of days to get over.

‘But like I say, I knew be­fore the Arsenal game and my performance isn’t going to change – the way I train, what I give for the club. I want to give everything and finish on a high, on 100 per cent good terms with the club.’

On his and Chelsea’s fu­ture plans, the former Eng­land skipper added: ‘We spoke about my legacy and coming back to the club when I finish. The most im­portant thing now is to get us up the league.

‘I didn’t feel as though I was playing great in the first four or five games of the season, like everyone in the team, and the performances showed that. But since then myself and everyone else has picked up back to where we are. All I can do is keep my head down and plug on because it’ll be my last year at the club.